A Lakewood Ranch retiree is one of the first patients in the country to receive an experimental treatment for pancreatic cancer through a trial offered at Sarasota Memorial Hospital. 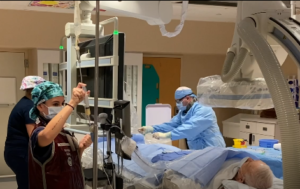 Vince Scully, 74, was diagnosed with Stage III pancreatic cancer in June, and initially underwent the standard treatment of chemotherapy and radiation. His cancer was inoperable but had not metastasized to other organs.

Dr. Kenneth Meredith, a surgical oncologist who is leading a multidisciplinary team at SMH, determined that Scully was a good candidate for the new treatment option. As part of an international trial, Scully received targeted chemotherapy delivered via a catheter inserted in his femoral artery directly into his pancreatic tumor. Doctors blocked the outflow arteries from the pancreas so that the chemo effects are localized and side effects are minimal compared with traditional treatment.

View the entire article on the Herald Tribune